English
×
You are here: Home » News » Inflatable Furniture » The History of Inflatable Sofas

The History of Inflatable Sofas

Inflatable sofas generally use general-purpose inflatable products PVC as raw materials, and pump air into the sofa. The inflatable sofa chair and inflatable sofa with pump are also free of the cumbersomeness of traditional furniture, and can be placed indoors and outdoors. After being deflated, it is small and easy to carry and store. Nowadays, colorful and unique inflatable sofas are widely welcomed by trendy people.

Inflatable chairs can be said to be the epitome of mass-produced disposable daily necessities in the 1960s. At the same time, they also challenge the long-lasting characteristics of traditional handicrafts. Its designer DDL is a Milan-based design studio, founded by Donato D'Urbino, Jonathan DePas and Paolo Lomazzi. The chair is produced by Zanota.

Whether placed indoors or outdoors, this inflatable chair made of cheap PVC plastic looks so interesting. This chair is not a necessity of life, but it is welcomed by a large number of people.

To this day, this chair is still being reproduced, and a large number of various replicas have been derived, such as inflatable air bed, inflatable double sofa bed and inflatable sofa with built in pump. 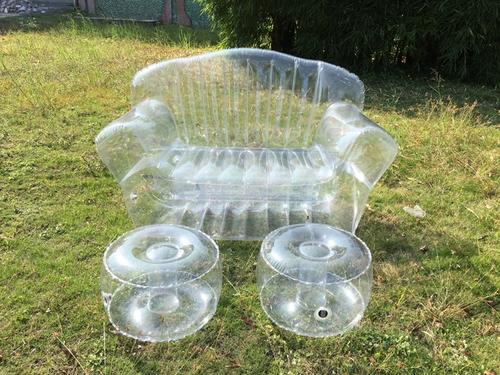 Inflatable sofas generally face the problem of outgassing. The inflatable sofa bed will make a sound when you sit down, which will cause displeasure.

But this has not stopped a new generation of designers from trying inflatable equipment. Tehila Guy's'Anda' chair pairs inflatable cushions with wooden frames sounds attractive.

The price of the inflatable outdoor sofa Big Blo produced by the Dutch company Blofield is not cheap.

This outdoor sofa can accommodate 30 people and can drive wooden stakes into the ground. But one thing to note, the sofa may stick to your thigh a little.

The inflatable bed is as big as a general household bed sheet after it is deflated, and it is also very light in weight. It can also be folded up and put into a backpack to carry around. It is a spare item for the family traveling at home or working.

Inflatable chairs, sofas, and beds are used for temporary rest when you go out to work, move, and camp in the wild. They provide you with the most comfortable resting environment.